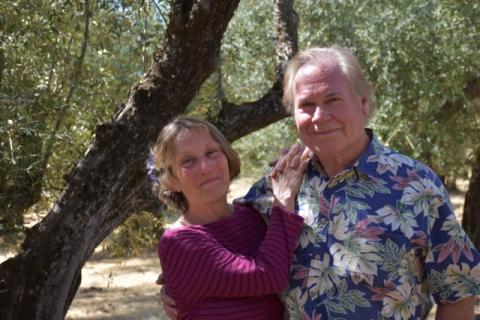 Olivia and Darro Grieco, the producers of this olive oil, were awarded two gold medals and a silver medal by the New York International Olive Oil Competition (the largest in the world), and three gold medals the previous year. He is a magnificent family farmer, the true husbandman of his soil, plants and animals.

Darro and Olivia have just returned from Cyprus and Greece where they received gold medals at the Aristoleo Awards and the Olympia Health & Nutrition Awards.

These two venues focus on high phenols and health and nutrition in contrast to the culinary focus of all other olive oil competitions. In total phenolics, Berkeley Olive Grove 1913 was the highest of all but one olive oil and theirs was the only American olive oil company to receive an award.

Over two thousand years ago, Hippocrates and Dioscorides referred to early harvest olive oil as medicinal. Modern science has identified the polyphenols, or more accurately phenolic compounds, that are beneficial. We urge you to research their effectiveness.

It is well known that most illness is the result of inflammation and it is the phenolic compound Oleocanthal that is known for its anti-inflammatory properties. Oleocein is a known antioxidant. These compounds are only found in olive oil. EVOOs [Extra Virgin Olive Oils] that test high in these and other phenols are in fact nutraceutical and, since olive oil is a natural food, daily consumption of High Phenolic EVOO is a smart choice for optimum health, vitality and longevity.